Ait Ben Haddou and the Movies Made There 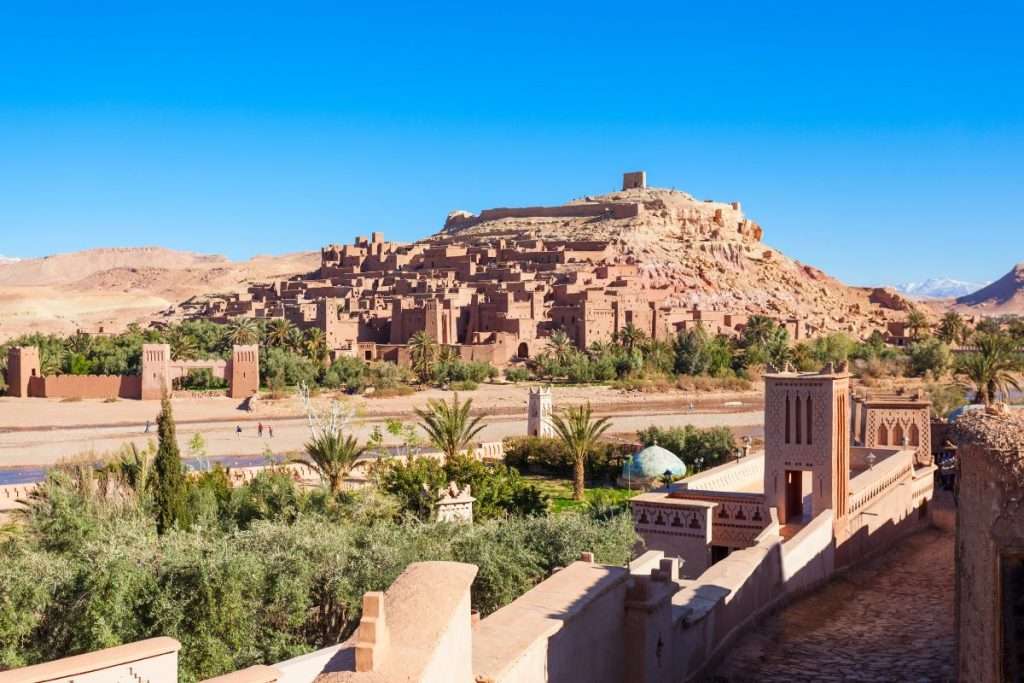 One location you may be familiar with before you even step foot in Morocco is Ait Ben Haddou. Read on to learn about some of the great movies that have been made there.

Ait Ben Haddou and the Movies Made There

Located approximately 19 miles Northwest of Ouarzazate sits the stunning and beautiful Ait Ben Haddou. The fortified village (known as a “ksar”) nestles on the southern slopes of the High Atlas mountains. The ksar is a collection of buildings made from the ground they sit upon. They are then surrounded by high defensive walls reinforced with towers at the corners.

The ancient village dates back to the 11th century when it was a stopping spot on the old caravan routes. Travelers carrying everything from salt to ivory and gold found the earthen buildings and walls a welcome sight. It offered a place of peace and respite.

Today, the walled ksar stands as an example of traditional Southern Moroccan architecture. It is the most famous ksar in the area – and possibly in all of Morocco – thanks to its appearance in several film productions. A UNESCO world heritage site, a visit to Ait Ben Haddou takes you back to another place and time. Only three-and-a-half hours from Marrakech, day trips to the ancient walled city are popular with travelers.

People often refer to nearby Ouarzazate as the “Hollywood of Morocco.” Two film studios call the area “home”, including Atlas Corporation Studios, the largest studio in the world . Morocco is the filming location for many movies, including “Jewel of the Nile” and “Kundun”. And you can see the enchanting Ait Ben Haddou in the following films and television shows:

Made in 1962, Lawrence of Arabia stars Peter O’Toole, Omar Sharif, and Sir Alec Guinness. It is the story of English officer T.E. Lawrence (played by O’Toole). The fortified village served as the location for several scenes from the famous movie.

The Jewel of the Nile

Released in 1985, the popular adventure stars Michael Douglas, Kathleen Turner, and Danny DeVito. One famous scene shows the main characters attempting to escape in an F-16 Fighter Jet. The filming location was the famous walled village. Not only that, you can see the F-16 Fighter Jet if you tour the Atlas Corporation Studios.

Spooky and exciting, the 1999 film The Mummy stars Brendan Fraser and Rachel Weisz. Although the film is set in Egypt, much of the filming actually took place in Morocco. Ait Ben Haddou was one famous filming location, along with Erfoud, Ouarzazate, and Marrakech.

The Ridley Scott film was released in 2000 and stars Russell Crowe and Joaquin Phoenix. Ouarzazate and Ait Ben Haddou were both very important filming locations for this famous film.

HBO’s Game of Thrones enjoyed an incredibly popular run from 2011 to 2019. The show is as well-known for its cinematic beauty as for compelling storylines. And the ancient beauty of Ait Ben Haddou is quite recognizable to fans of the show as the great city of Yunkai in Slavers Bay.

Considering a Visit to Ait Ben Haddou and Ouarzazate?

Scenes from over 20 movies and productions have been filmed in Ait Ben Haddou. It’s an awesome place to visit for any film buff vacationing in Morocco. Here at Roaming Camels, we offer a wonderful Day Trip from Marrakech. But there are many other great ways we can help you visit this beautiful area of Morocco. Get in touch and we can help create a personal tour just right for you and your family.

The beautiful fortified village of Ait Ben Haddou is a great place to visit with a guide. You can also have an enjoyable time heading there all on your own. Either way, this enchanting historical desert city should definitely be on your Moroccan “bucket list.”